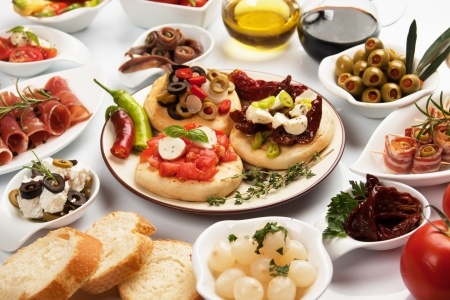 Defining and understanding the Mediterranean Nutrition and Diet is not easy because there are several countries that border the Mediterranean Basin. Still, the traditional diets from the people living in the 1960's in countries like Greece, and Southern Italy have been studied extensively over the past several years.
This is due to the notably low incidence of chronic diseases and high life-expectancy rates attributed to these populations who ate traditional Mediterranean diet foods. The traditional Mediterranean diet delivers as much as 40% of total daily calories from fat, yet the associated incidence of cardiovascular diseases is significantly decreased. As a monosaturated fatty acid, olive oil does not have the same cholesterol-raising effect of saturated fats. Olive oil is also a good source of antioxidants. Eating fish a few times per week benefits the Mediterranean people by increasing the amount of "Omega-3 fatty acids" - something that the rest of the developed societies don't get enough of.
Eating red meat sparingly seems to also increase health. There is a general consensus among health professionals that the Mediterranean Diet is healthier than the North European and American diet because more grains, such as spaghetti, fruits, vegetables, legumes, nuts, and olive oil are consumed. 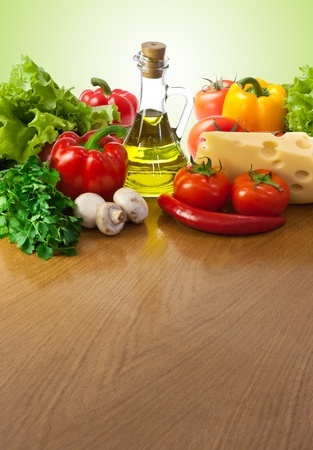 Olive oil in Mediterranean Diet
Being a traditional product of our country, olive oil stars in our daily table and the most known dietary pattern in the world, the Mediterranean Diet. If we wanted to identify the main dietary feature a Mediterranean Diet, then this was certainly the presence of olive oil. Located in third level of the Mediterranean Diet pyramid.
The elements that make it so special, beyond the particular flavor, is the high content of beneficial monounsaturated fats, which provides the proper functioning of the cardiovascular system and maintaining overall our health. Moreover, olive oil is rich in antioxidants which are the instrumental fortification of human body against oxidative stress and thereby prevent premature aging cells.
Finally, olive oil is one of the dietary sources of vitamin E, a vitamin that shows strong antioxidant activity.