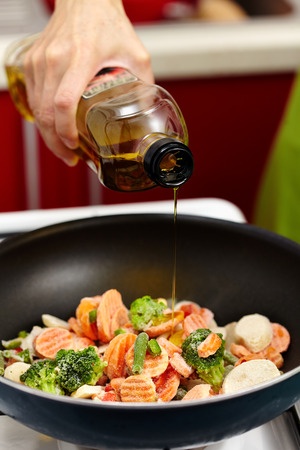 Frying is a very common method of cooking, not only in our country but all around the world. Although fried food is unhealthy, it seems that its quality can be determined by factors such as the type of oil we use and the frying temperature. The main change that takes place while frying is the oil acidity increasion and the production of harmfull compounds. However, as higher the antioxidant content of oil is, the more stable remains during heating. Changes in the composition of oil depends also on the temperature and the duration of frying, the number of times that oil has been used, the type of frying and the kind of food. Olive oil is recognized as the ideal for frying. In a suitable temperature, when it’s not overheated, no significant changes held in its chemical structure and retains its original nutritional value more than other oils, not only because of the antioxidants that contains but also because of its high content of oleic acid. The smoke point of olive oil, the temperature in which it is starting to "burn", is 210 º C, a temperature higher than the perfect frying temperature (180 º C). Other fat options with lower smoke points, such as butter, degrade significantly on this temperature, producing toxic products. 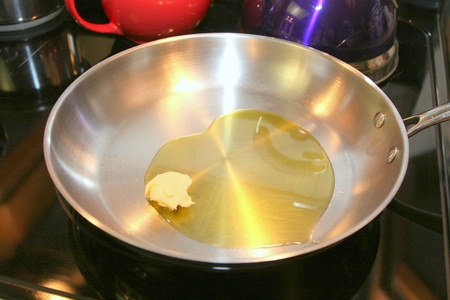 Another advantage of using olive oil when frying is that it forms a thin crust on the surface of the food which prevents the penetration of oil, so the food does not absorb much oil.
It is estimated that foods that fried with olive oil have a lower content of fat, which makes olive oil the most appropriate oil for frying for those who watch their figures.
Moreover, Olive oil can be used more than once because it is not oxidized much during heating. But remember that it should be a limit, it should not be used more than 4-5 times, while it is not recommended to be mixed with other oils.